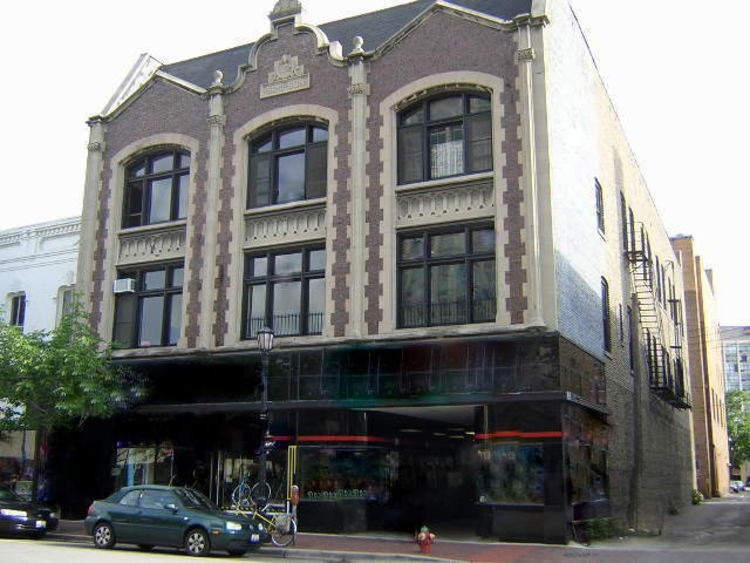 Hammond Clock Company
4115 N. Ravenswood Ave.
Chicago, Ill
First move in early 1930 to this temporary rented second floor space to manufacture electric clocks. The front of this building has been extensively remodeled and only the second floor is original. 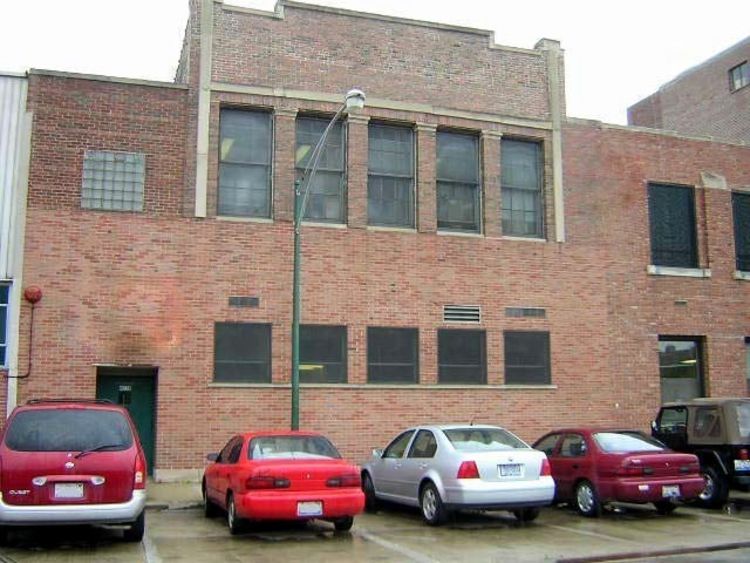 Hammond Clock Company
2911 N. Western Ave.
Chicago, Ill
Moved in 1930 to this five story company-owned building.
The first prototype and patent model Hammond Organ was built here in 1933.
The “2911” doorway was bricked up some time before mid 1931 and later records list this property as 2915 N. Western Ave. 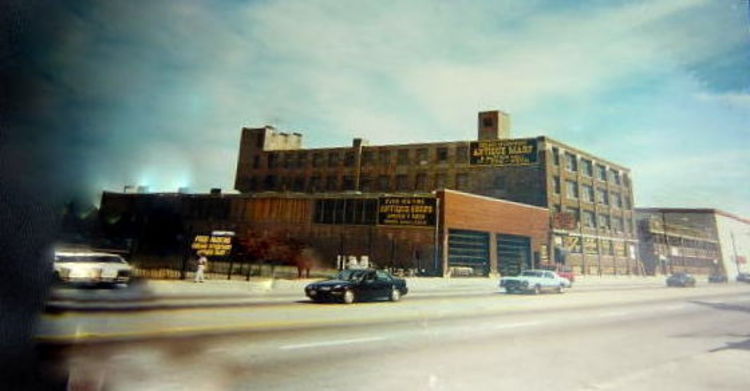 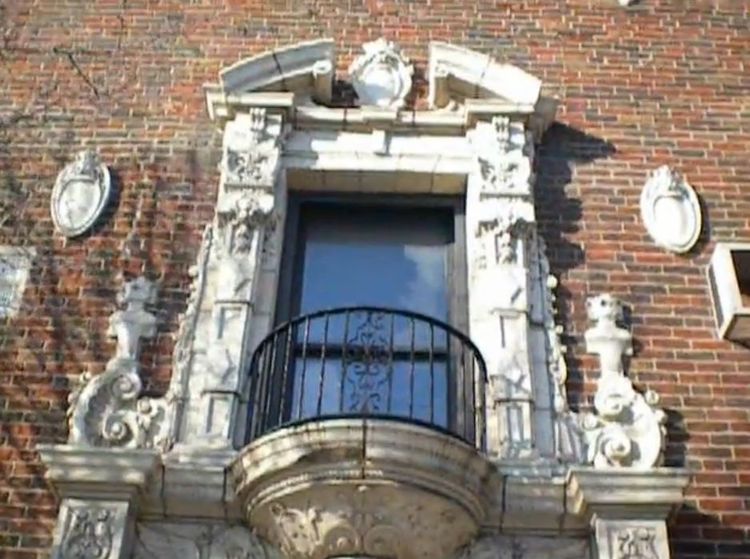 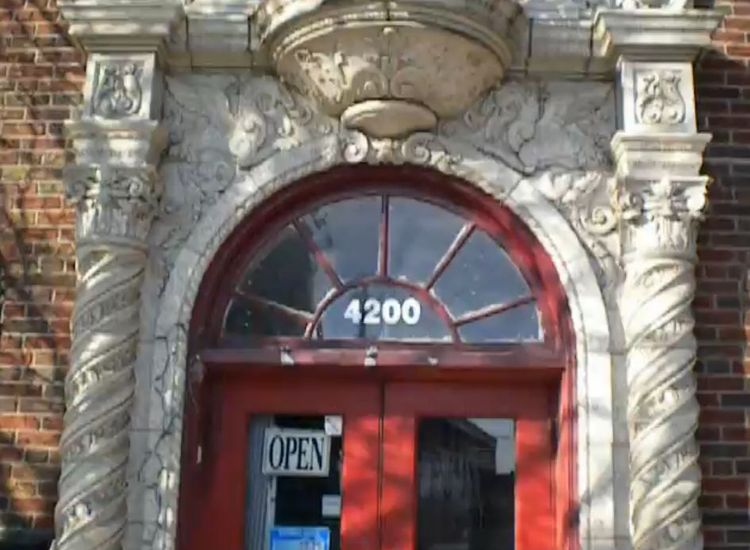 The Chicago (home) store was located in the old American Furniture Mart.
The address was later changed to 680 N. Lake Shore Drive, possibly to avoid negative biblical references to the Mark of the Beast. 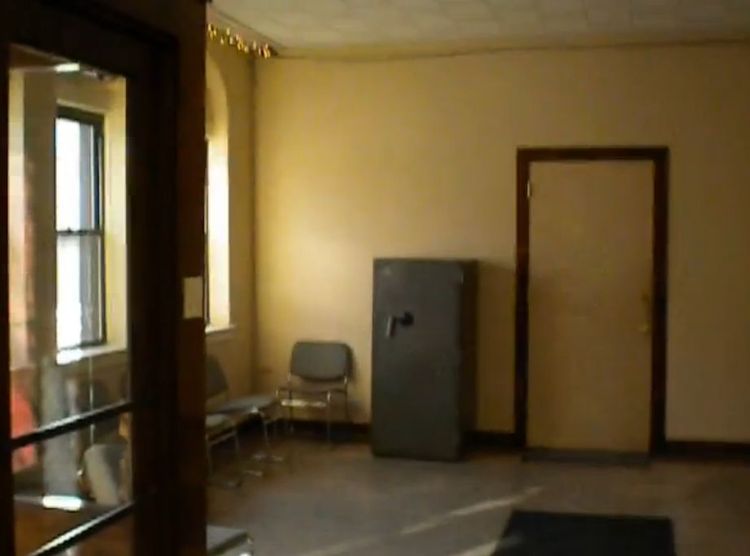 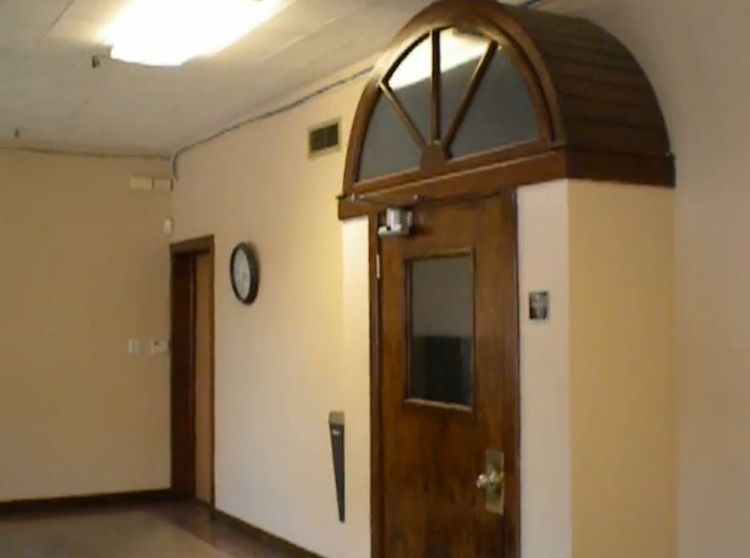 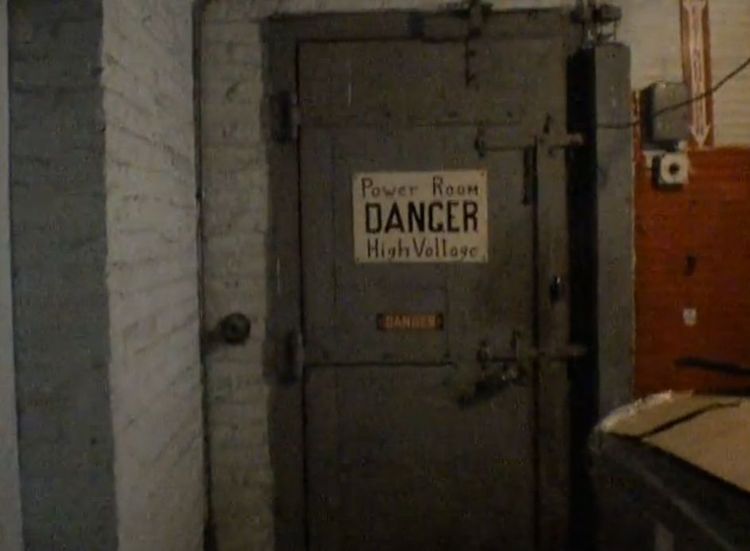 Hammond Organ Co.
4200 W. Diversey Ave
Chicago, Ill
Organ manufacturing, service, management and marketing from 1949 to 1986. Here the B3 and C3 were manufactured. A three story annex was added in 1956. This became the company headquarters, but the Western Ave plant was still used for manufacturing and research. 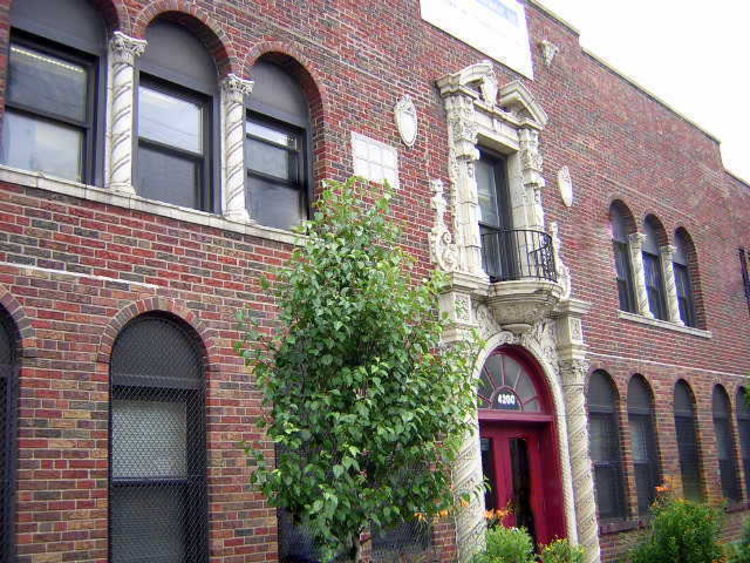 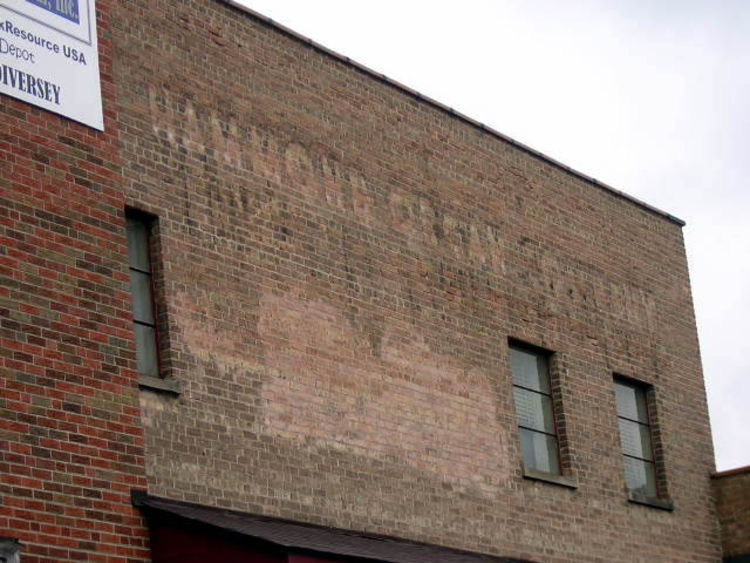 You still can see today, where the letters were. 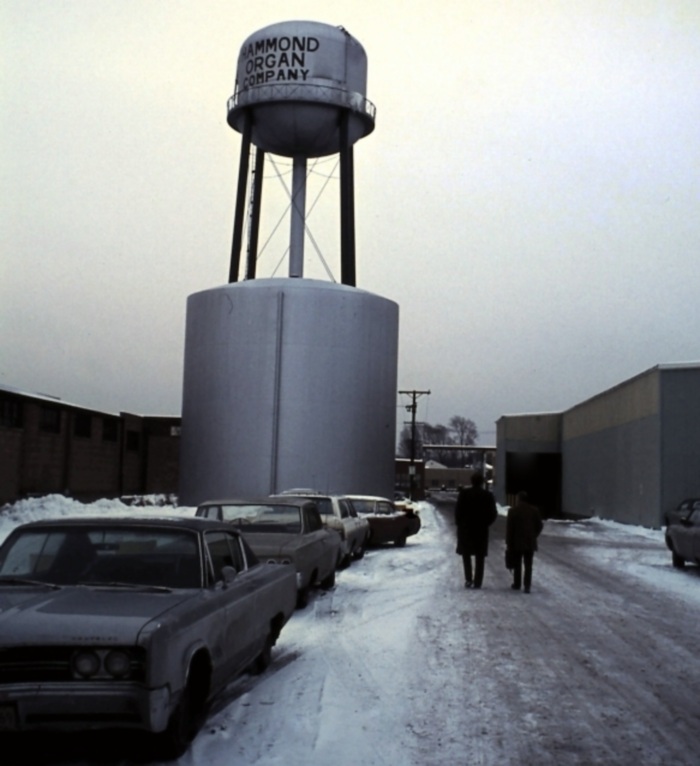 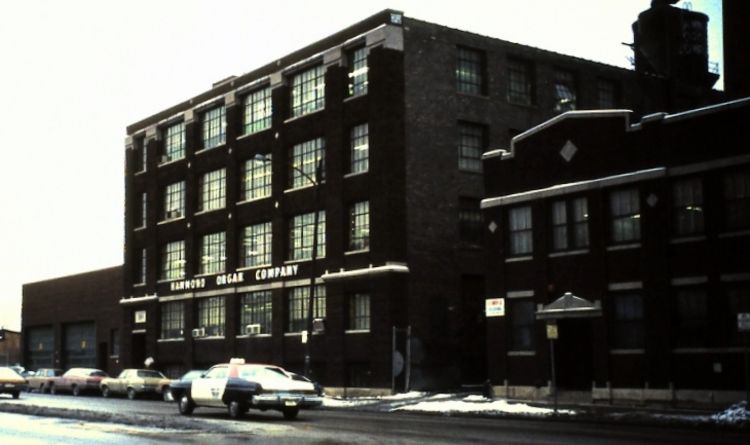 In this factory the SPINET model and the A-100 were built. 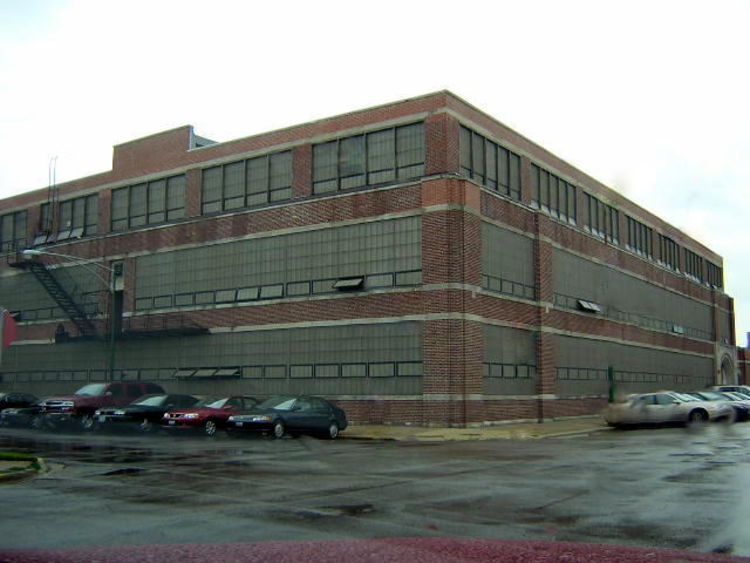 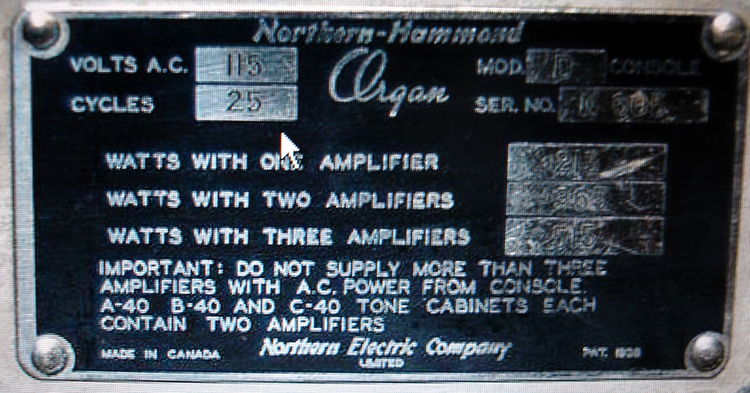 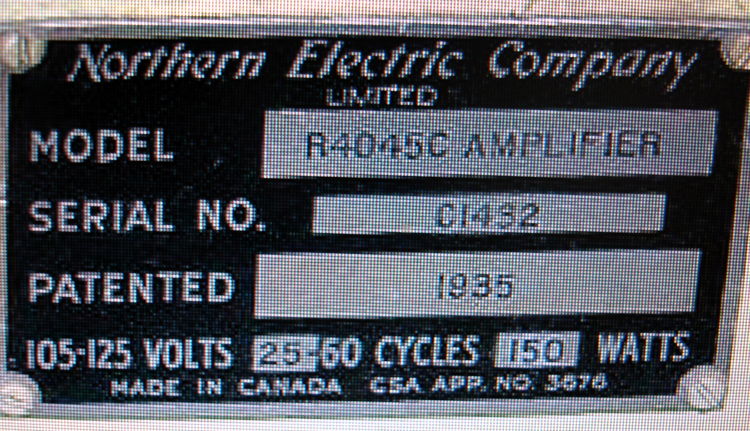 Northern Hammond was manufacturing in Canada by Northern Electric at the Montreal plant and at the Belleville Ontario Plant (on Water Street) for a few years.
Northern Electric became Northern Telecom in the 1970s and was renamed again last year to Nortel.
The Belleville plant has been moved to Sydney Street and the old plant on Water street
where the organs were made is still standing (thoroughly renovated into a professional commercial center)
I know this because I am temporarily working in Belleville and the gym where I work out is on Water Street next door to the old plant.
Last month we, the Nortel Sydney Street plant, were celebrating our 50th anniversary (the Water Street plant is older yet)
A hall of fame displaying some of the various products that were made here was set up and retirees were invited along with dignitaries (including the prime minister of Canada)
Amongst the objects displayed was the good old Northern Hammond model D which otherwise leads a peacefull existance in the cafeteria.
Needless to say that I took the ocassion to do some history gathering.
I have the name of two fellows who individually tested every single organs assembled here.
I gather that these guys were excellent organists and one of them rocked the place down every lunch hour.
I am still debating wether I should or not disturb these people in their retirement with my fanatism.
The Northern Hammonds are essentially the same as the Chicago Hammonds with some very minor differences.
Northern Electric has now become Northern Telecom (NORTEL) which manufactures telephone and data communication equipment.
The plant in Belleville is still going strong, manufacturing PBXs and data network switches.
I gather that the Belleville plant had leftover parts from its organ manufacturing years up to 4 years ago when it junked everything. I became aware after the fact.
Business takes me to that plant every now and then since I work for NORTELs R&D subsidiary (BNR) designing products that are manufactured there.
Every visit to the plant is punctuated by a spinning of the old faithfull model D that still sits in the cafeteria. Northern Hammond was affiliated with Northern Electric in Canada.

As of January, 1973, Hammond Corporation operated the following eight locations:

Hammond International Pty. Ltd
Beaumont Road
Mt. Kuring-gai N.S.W. 2080
Australia
Australian Noel Crabbe bought the Hammond name and remnants of the company after the 1985 liquidation.
Organs in those days were manufactured in Japan at Sakata Shokai under Direction of Mr. Takahiro Miyatake.

“Electro Music Accessories Co.”
3804 W. 54th St.
Los Angeles, CA
Early nameplates list this location/company names, as manufacturer of Leslie Speakers.
The address, however, was that of Lou Brittain, an early Leslie partner.
The partnership was dissolved after WWII and Leslie Speakers were never built at this location.

Electro Music
199 S. Fair Oaks Av.
Pasadena, CA
Early Leslie Models 30A and 30C were produced in this rented storefront from 1940-1943 and again after WWII. The current tenant is a curio shop.

Electro Music
267 S. Fair Oaks Av.
Pasadena, CA
Post-war models were built here some time after 1946.
The original building has been demolished and this location is now the site of a medical center and parking garage.

Electro Music Inc.
56 W. Del Mar Blvd.
Pasadena, CA
Final Leslie Speaker plant in California.
Built by Don Leslie in 1964 and sold to CBS, Inc. in 1965.
CBS produced Leslies here until 1980, when the company was sold to the Hammond Corporation.
Hammond’s Accutronics Division built Leslies in the Chicago area until the 1985 reorganisation.

William Andrew Hammond House
235 Greenwood St.
Evanston, Ill
Hammond family home, ca. 1883 to mid 1909 when Idea Hammond moved to Europe, with two year old Laurens and three older daughters after the suicide of William Hammond in January 1897. The family returned to this property in 1909 and lived here until 1912.

Hammond Family Residence
1305 Forest
Evanston, Ill
Hammond family lived in this home from 1912-1914.
This property is one block south of the original family home on Greenwood.
Also, Laurens Hammond’s older sister Elizabeth is listed in the 1914 Evanston phone directory as living at “1313 Forest.” This is the same property.

Early Hammond Residence
12 Gramercy Park
New York, NY
Laurens Hammond’s New York residence following WWI and during the years he worked on his synchronous AC clock motor and 3D movie system projects. (1921-1923)
His first lab was near by at 456 Broome St. at this time.

Hammond Residence
418 Hamilton St.
Evanston, Ill
Laurens Hammond, his first wife Mildred and baby daughter lived in this multi-unit Evanston apartment building when they returned to Evanston in 1925 (from New York) until 1929.
Hammond’s mother also lived here until shortly before her death in 1938.
(Laurens Hammond may have owned this building)

Laurens Hammond Estate
3 Ford Hill Road
Cornwall, CT
Laurens Hammond’s primary residence after his retirement in 1960.
He lived here until his death in 1973.

Jensen Manufacturing Company
6601 S. Laramie Ave.
Chicago, Ill
Speaker manufacturing business founded by Peter Jensen in 1927 and moved to Chicago in 1929.
Jensen built speaker components for Hammond and Leslie tone cabinets through the 1960s. Company is still in business but has undergone numerous corporate changes over the years.
This building and nearby properties are currently owned by the Acorn Corrugated Box Company.

J. C. Deagan
770 W. Berteau
Chicago, Ill
Chime and carillon manufacturer.
Hammond and Deagan cooperated with related products for the church market.
This building is on the corner of Ravenswood and Berteau (4300 North)

Except for Organ Service Company Inc. these companies have no association, past or present with the former Hammond Organ Company, Electro Music (Leslie Speakers) or Hammond/Suzuki Inc. USA.

Chicago Riverfront Antique Mart
Herbert L. Levin, Owner
2929 N. Western Ave
Chicago, Ill 60618
Current owner/operator of the 2915 N. Western property.
(The building’s address has once again been modified to make it easier to remember)
It is being converted into condominiums.

Organ Service Company Inc.
Jerry Welch, Owner
6475 Joliet Road, Suite B1W
La Grange, Ill 60525
Former Marmon company that evolved from reorganisation of the Hammond Corp. in 1986. Provides organ parts and service.
Originally based in the 4200 W. Diversey building, the company has since relocated to this address.